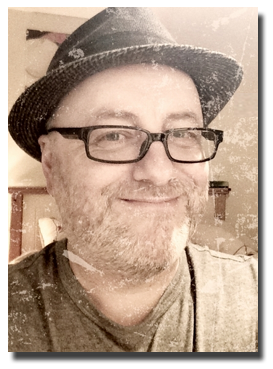 He was born and spent the first 12 years of his life in the Northwest of England. His folks were both Irish, Dad from Meath and Mum, Kildare,

After a couple of years in New York and a year or so in London, Meath has very much been his home. After England Chris lived in Navan for about 5 years during his teens, but all his subsequent time in the county has been in the Kells area. You could throw a stone anywhere around here and hit a relation of mine he says! Not that I advocate anyone throwing stones at my clan!! We’ll get ya! I have a lot of family here. I actually make a joke about this in my song “Like We Do In Kells” [from “A Crack In The Cosmic Egg”], I think I mention there are 4 or 5 relations with the same name as me. It’s not even a slight exaggeration (laughs). My Grandad, my uncle, two cousins and myself all share the same name! In one instance there’s a shared birthday too! Crazy! I’m honoured though to be part of that nomenclature! Great word "nomenclature". Must put it in a song sometime.

Chris was, and still is, a huge anorak when it comes to music…it’s only in the last few years he has had the encouragement to record his music and to get beyond his embarrassment of people hearing him sing! He is still very uncomfortable with that though...very...

Chris and his wife Amanda have two pups, a wee Dachsound called Willow and a little Maltese called Walt.  He says "It’s like having babies all over again! I was bitten on the ass by a huge Alsatian when I was sixteen (laughs) so I’ve never been a dog person."

Tea-total Chris never drank and so is not a person that hangs out in the pubs et cetera . But then to be fair he's probably more than a bit socially awkward. He doesn't like crowds, doesn't socialize much, keeps to himself most of the time and is rubbish at keeping in touch with folks. Even the ones he particularly likes! In his own words "Ah ok, go on, you can call me reclusive then! (laughs). It’ll add to the mystique! But you could call me boringly low key either. I won’t be offended (smiles)."

Chris met Bruce Springsteen... "I wrote a song about the meeting which explains it all...[The song is “Yes, He Hugged Me” from Carrys’ first record “A Crack In The Cosmic Egg”]. My written version of story has also been put into print a couple of times so I can say I’m published as a writer too (makes a ticking of the box motion). I LOVE Springsteen, what else can I say?

I’ve seen many amazing concerts over the years, Queen, McCartney, Neil Young, Tom Waits and so on, butnone of those can be compared to a Bruce show. It’s like an addiction to having a good time. 39 shows and never just an “ok” or a “bad” one.Springsteen gives 100% every night. It’s truly remarkable. We’ll never see it again after he’s gone. He’s an inspiration."

Buying Albums   were life changing events! Truly.For me music was a conduit to connecting with myself. It’s been my teacher, my moral compass, my peace of mind. It’s just ingrained in my DNA. I live and breath music.

I still remember ordering and buying my Bowie vinyl records from Disclandin Navanwhen there used to be an arcade type shopping area just off the same main street. Navan! Music mecca of my world!! Discland moved after that to the main street [Trimgate Street]. Used to hang out there so much, must have really annoyed the owners at the time! Bought my first Dylan album there too.

There were 3 or 4 record shops in Navanthose days…another one up across from (thinks)…a ladies clothes shop (“Lily Coogans”rings a bell”?).

It was between two pubspossibly ”Loughrans” and “The Tailteann”??...I remember buying “Tragedy” by the Bee Gee’s for a girlfriend there!...there was another record shop on Brews Hill, just down from “McEvoys” shop, across from the old Lyric cinema…I bought (incredulously) an EIGHT TRACK cassette copy of Bowies “Diamond Dogs” there…(laughs) didn’t have an 8 Track machine to play it on though!…and Marc Bolan’s last album there too [T.Rex – “Dandy In The Underworld”] …could have been a sports shop at the time…man, you’re digging out the cobwebs now!...

I clearly remember ringing CBS (now Sony) Records in Dublin to find out the release date for “Born In The USA”…I took what was in those days a day trip to Dublin to pick it up, only to find “Golden Discs” and “Dolphin Records” didn’t have it in stock!!…came home completely dejected on the Kells bus only to find that the exact same bus I was on, was carrying a box of the album to be delivered to Tom Murrays Fishing and Shooting shop!! Picked up my copy before I went home…fishing shops, sporting goods and car parts shops!! Did everyone buy records this way (laughs)...

Chris Carry can be found on iTunes and also at  http://www.cdbaby.com/Artist/ChrisCarry. You can also check out his web site http://www.chriscarry.com